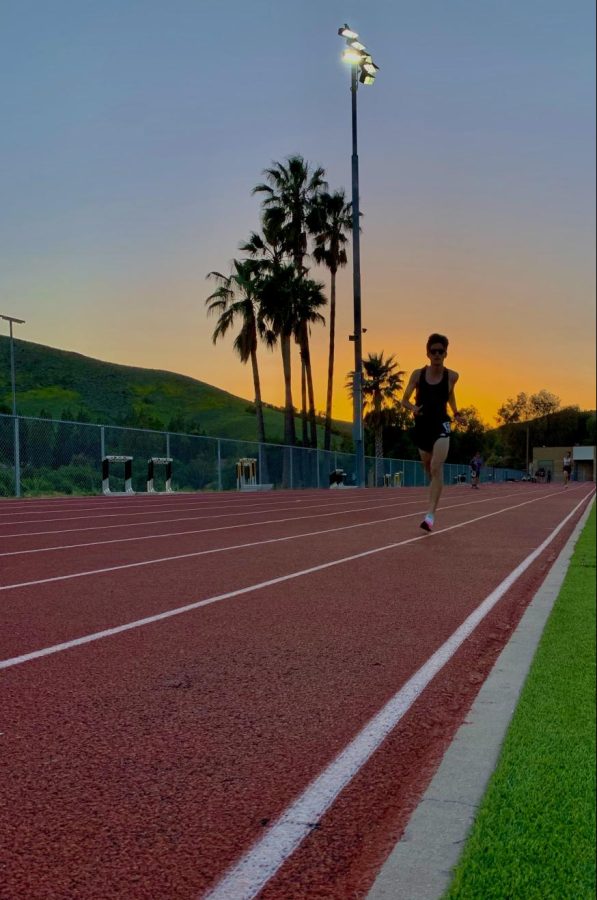 Junior Jonah Bazerkanian lapping Oak Park's runners in a 3200 meter league race. He placed an incredible 3rd in the 1600 meter race at the State Championships on Saturday, May 28.

The first league meet of the season started against Camarillo, where our sprinting events were almost getting out of reach but senior Ethan Bettes and junior Jennyfer Hernandez scored points in the 100 meters each taking 3rd place for varsity. Bettes also ran very well in the 200 meters taking second place and running a seasonal best. The girls’ JV gave no exceptions taking second and third place in the 200 meters. Both juniors, Jonah Bazerkanian, Noah de la Rionda, and senior Roberto Alvarez swept the boys’ varsity 800 and 3200 meters taking first, second, and third, first, and second in the 1600 meters.

In the varsity field events, seniors Dustin Ritcheson and Tristen Barth took first and second in the long jump. The throwing events were all won by senior Chris Renfro. This gave the varsity team enough points to win. With an ending score of 68-66, the team won its first league meet.

In the excruciating heat and humidity against Oak Park, the boys’ varsity team won more than half of the races. Gonzalez won the 400-meter dash, Bazerkanian won the 800-meter race, de la Rionda won the 1600-meter race, Bazerkanian won the 3200-meter race, and Renfro won the discus toss. The girls’ varsity took their first win against Oak Park. The key was the girls’ 3200 meter where the team took all top places and senior Janet Gonzalez brought the team the most points with 13, ending it with 79-73.

The only home meet was held against the three undefeated teams in the league. Moorpark, Simi Valley, and Royal battled on the same day. The highest stakes meet was going to define the league championship on the home field. Mid-distance coach Peter Mogg said, “If everything works to plan we should be able to win by a very small amount.” As every race passes by the three teams shift lead by five or three points, making the suspense palpable. Head coach Tony Valadez said, “I want everyone to cheer for the four-by-four team because it might be up to the last race to define the winner.”

As of the last race the team seemed to win and although the team won the four by four, Moorpark became the league champion with the team losing by only eight points. After a very energetic meet, the distance guys were sent to Mt. Sac relays where they shattered the 4 x 800 meters school record by eleven seconds. The team runners consist of Bazerkanian, de la Rionda, Alvarez, and senior Diego Rivera. Not only did they shatter the school record, but they also ran the third-fastest time in the state of California.

The qualifiers for CIF prelims consist of both boys and girls 4 X 400 race. Efforts and performances were top-notch, which earned sophomore Quincie Richards a spot at the CIF finals for the triple jump, Bazerkanian for the 1600 meter, and de la Rionda in the 3200-meters.

At the CIF finals, Bazerkanian was the last one standing as he advanced to CIF Masters where he finished fourth place overall. Bazerkanian said, “ It feels amazing achieving all of these accomplishments but it is very hard to get them, especially because everyone on the team is gone and now I have to train alone and it’s no fun like that.” Bazerkanian also advanced to State Championships which was be held at Clovis High School in Fresno on Saturday, May 28. He placed an amazing 3rd at State in the 1600 meter race, with a lightening fast time of 4:11.89.