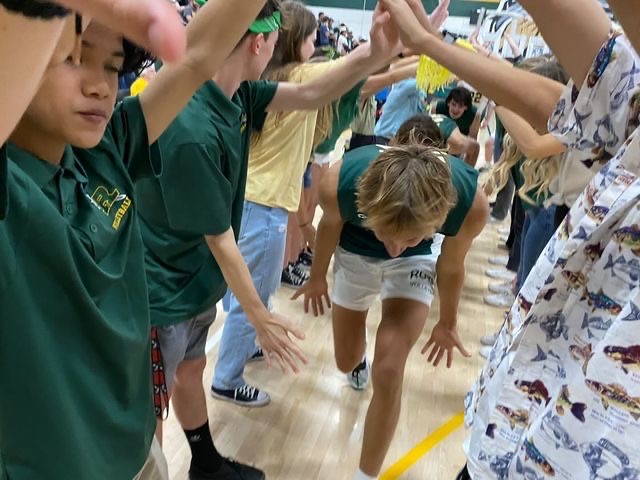 Varsity volleyball players running through a tunnel of their fans.

After months of hard work and determination, the boy’s volleyball team won their first CIF championship title in over 28 years on Saturday, May 14. After weeks of CIF playoff matches, the team found themselves going against the Upland Highlanders who hadn’t lost a set throughout the playoffs.

Royal kept up the pressure all throughout the first set. Any time Upland got a point, Royal responded with two or three of their own. Good defense, consistent serving, and strong attacks led Royal to win the set, 25-17. The second set was rockier. Upland kept the match tied and the game was close. However, Royal hit their stride and didn’t let Upland keep the lead, taking the set with a score of 25-23.

The third and final set showed the best of both sides. Upland kept the team on their toes with strong hits, amazing defense, and good serving. Royal responded harder with senior hitter Derek Bradford racking up 16 total kills and seniors Evan Costley and Braeden Wooton getting eight kills each. The defense remained rock-solid with senior libero Spencer Borth, son of head coach Dean Borth, and senior Evan Ford getting 24 combined digs throughout the match. Costley, the team captain, ended the game with a service ace, winning the Royal Highlanders the 2022 CIF-SS Division 3 Championship Title.