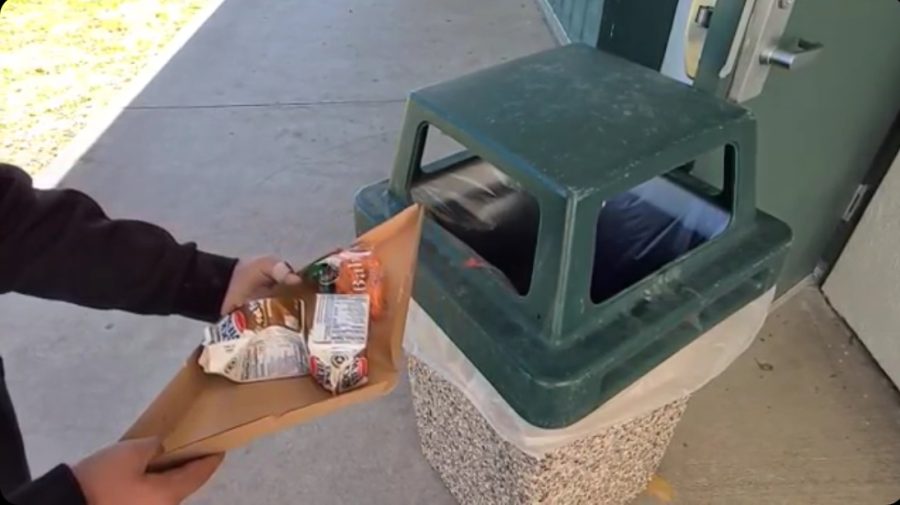 A student contributing to their responsibility of keeping the campus clean

The sky was blue, the sun was shining, but the birds didn’t chirp. Instead, they squealed and cawed as they fought each other for the scraps of trash and food that littered the quad after lunch.  Brown paper trays and wrappers were pecked at to test their edibility.

Littering is not a new issue, and has been a problem in school campuses across the world for decades now. From a lack of trash cans, to a lack of biodegradable containers, to an uncaring youth, many ideas and opinions could be pinpointed as the source of student littering and the environmental damages it may cause.

From college campuses, to the streets of cities, to farms in the countryside, trash can be found everywhere. It is a lesson that is often taught to children, but it is rarely a lesson that is taken seriously enough. People should know to get rid of trash, and to recycle when they can, but that lesson might need to be emphasized more. “I feel that it is just common sense, and that we don’t need anymore lessons about it. We learned to pick up after ourselves in the third grade,” said Rabecca Turabaz, a freshman at Royal.

Many students lack the patience to prevent trash buildup. Most people believe that their one piece of trash won’t hurt anything and won’t do any damage, but the hundreds of thousands of these “one-time-only” occasions add up. Mr. Brian Dennert believes that it comes down to the person themselves. “I think it’s an individual responsibility not to litter, instead of focusing on the people that should be picking up for them,” said Dennert. It is important for people to not justify littering and to instead find the patience to clean up after themselves and others.

This trash that is left can cause serious damage to the environment and its inhabitants. Animals are the innocent victims of our blatant uncaring and mistreatment of the planet. According to a study conducted by Keep America Beautiful, cigarettes, food wrappers, plastic bottles, aluminum cans, and disposable cups are the most littered items in America. These discarded items can lead to the deaths of millions of animals via ingestion, entanglement, and more. According to the Center for Biological Diversity, over 100,000 marine animals die from plastic annually, over 1 million birds die from entanglement and ingestion each year, and over 100,000 land animals die from litter annually.

Many people rely on other people to clean up for them, such as cleaning or janitorial staff. When the individual doesn’t take the responsibility as their own, they tend to blame others for “not doing their job,” without looking at the heart of the problem. “Cleaning up will only do so much for the school. It’s like putting towels down in front of an overflowing tub but not turning the water off. We have to really dig into people that they need to pick up their trash even if it isn’t theirs,” said Turabaz.

However, litter does not come out of nowhere. It all starts with disposable, easy-use items like water bottles and paper lunch trays. These products are made with cheap, multi-use materials that are as optimal as possible. Materials like plastic, cardboard, and aluminum are all used for production on a mass scale. Reducing our reliance on products like this is the first, and likely the biggest step on the road to fixing littering and the environmental damage it causes.

Reusability and recyclability are two leading concepts in the future of sustainability. Reusable water bottles, for example, are getting exponentially more popular. These advances are bringing a more sustainable future to students and teachers alike, and are making the campus cleaner and healthier for all.

In the end, there is a lot that both the students and the school could do to bring a better future to their community and to the world. We can work together to find solutions to problems like litter, environmental damage, and sustainable sources of energy. Together, we can find a way to move into the future and create a better world for each other.