Cleaning up the community 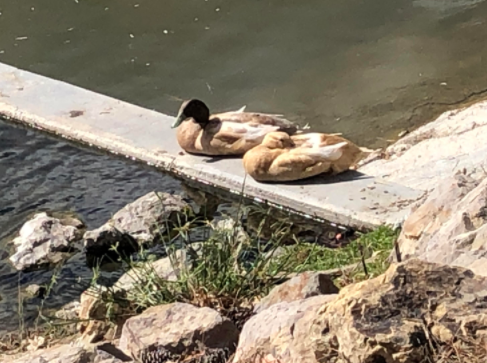 Ducks near the Greenways, at the Royal cleanup!

On March 5 students woke up at 9:00 a.m. to help clean the Arroyo Simi Greenway at the Duck Park. There were some extraordinary finds: a student found a raccoon skull (which was later given to Mr. Dennert).
“I am amazed at the number of volunteers that were there to protect the waterway including the ocean from trash. Royal High School students had fun while getting involved in their community. As an added bonus a student gave me a raccoon skull they found! I am looking forward to the next time we do it,” teacher Mr. Dennert said.
Junior Kevin Kopcinski found a weed wacker and what seemed to be the bottom of a wooden medal barrel. Other students found a bike and a shopping cart.
The event started at around 9:00 a.m. and ended at 11:00 a.m. Students went in two separate teams (groups), one group went to the north side of the creek, the other on the west side. Each student was given a pair of gloves and a trash bag. They walked for about two hours while stopping to pick up trash along the way.
The ducks were up early and swam in the creek but the water wasn’t blue, instead it was green and polluted with trash. Everyone did the best they could to clean up the mess others made without getting hurt and touching unsanitary items.
The day was a mix of sun and wind. Ms. Fancett, teacher and the Junior Class Council advisor, came up with the idea of cleaning up the community. The cleanup was a success thanks to junior Joy Oh who talked with the Parks and Rec, and other clubs on campus.
There were a total of 50 Royal students that showed up to help clean the environment. Oh said, “Throw your trash away! It may not seem like a lot, but it makes a big difference. Do it for the health and safety of your friends, family, community, and yourself.”