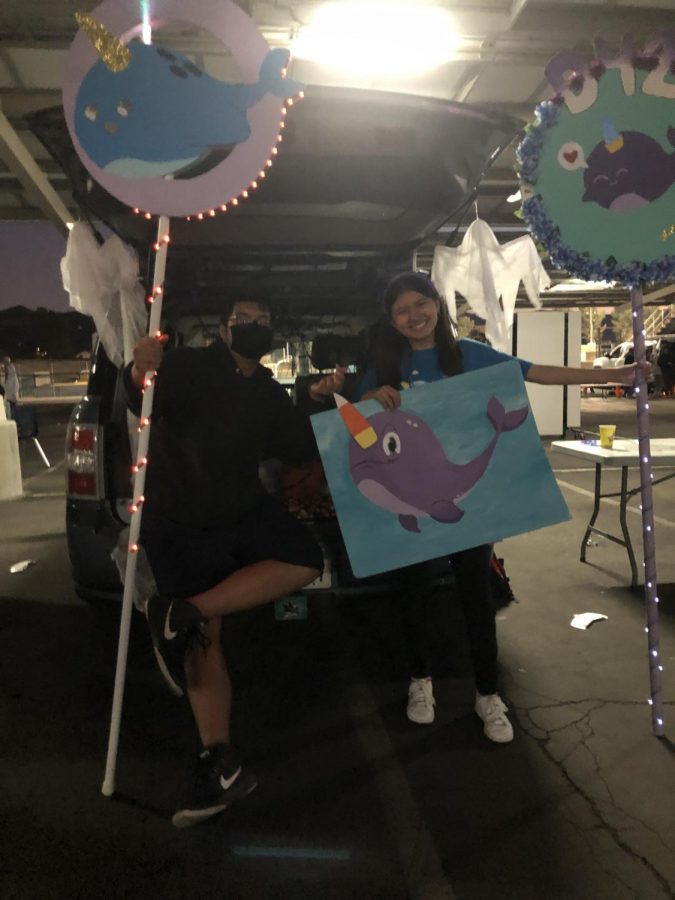 On October 26, Royal High School held a community activity and fundraiser for both the community and the school in the school parking lot. The event was filled with candy, games, face – painting, and decorated trunks each with either a spooky Halloween theme or ones that had their theme like Unicorns and Star Wars, even Key Club? themed. Our own Vice Principal Mrs. Myszkowski’s car was a lovely Star Wars-themed which matched her Jedi costume. The event helped fund more clubs at the school, the AROTC program had a drone flying around taking footage of the whole event which lasted from 5:00 p.m. till 7:00 p.m. Each treater had on costumes like spiderman, Cruella Deville, Georgie from It, Pikachu, a witch, zombie, scarecrow, unicorn, fairy, dragon, nerd, minion, baby Yoda, hippie, Minnie mouse, corpse bride, little red riding hood, tune squad, a ghost, a Teletubbie, and Stitch.
The trunkers were all volunteers from the school and even the community, each trunk handed out candy and the treaters were happy and full of sugar playing fun games like pin the candy corn on the narwhal for Key Club, a football toss game hosted by our cheer-leaders, a corn-hole game for the Junior class Council, they even had a pie the teacher booth. The whole event was free and open to the public and the stations were more of the clubs and programs that are here at Royal.
The only thing that cost money was the games, they had to raise some money to help and create new clubs, when you arrived at the front there was a table where you could buy tickets to play games, the tickets also came with a bag for the treater’s candy and a glow stick with glasses. This year was the 2nd annual Trunk or Treat here at Royal they planned on having one last year but due to covid complications, they had to cancel. If you couldn’t come this year the event is planned to take place again next year. The trunkers did a swell job at decorating their trunks, overall it was a night to remember.