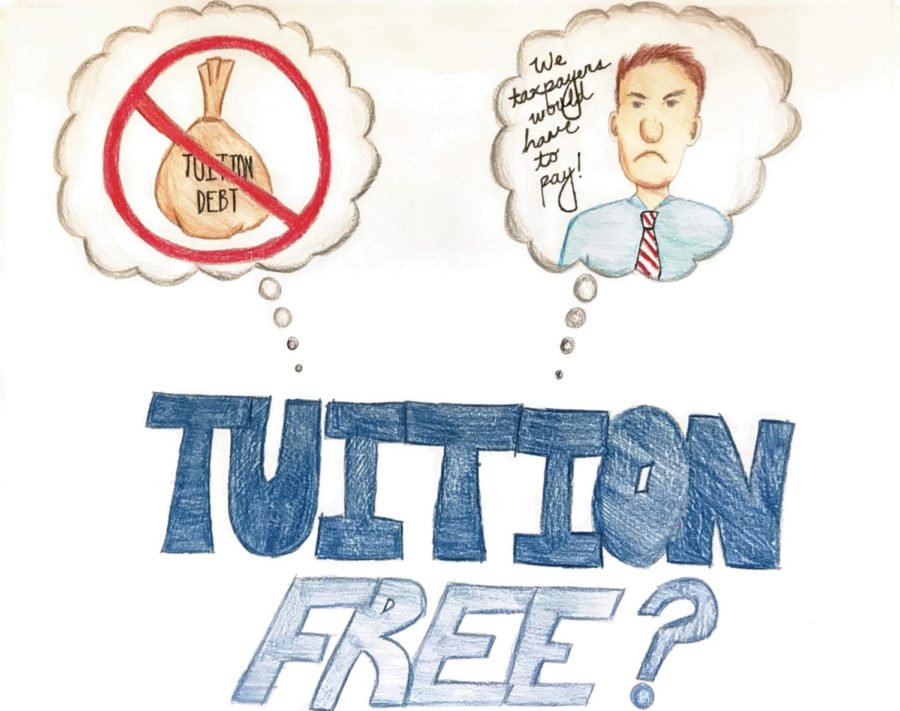 The debatable topic of whether or not public institutions in the United States should provide tuition-free education presently looms over the heads of Americans. College students, graduates, and taxpayers lie at the heart of the dispute. In simple terms, the word “tuition” describes the money charged for actual teaching/instruction. A large number of families in this country cannot afford higher education without governmental assistance. Subsequently, for a graduate, post-college life might consist of having to compensate for the great amount of money given through student loans. Therefore, the thought of tuition-free higher education should sound like a blessing, right? Not so fast! The question of who would fund this practice lingers, and alas, taxpayers would play that role. Undoubtedly, when determining the answer to this controversial topic, the benefits and drawbacks brought forward deserve equal recognition.
To begin with, eliminating this expense could lead to a decrease in low-income students dropping out due to financial struggles to pay the fee and in turn, providing an easier pathway for them to graduate. Although tuition isn’t the sole reason college attendees might cease to finish their education, having that burden for four years can create difficulties. Next, graduates wouldn’t have to drown in vast amounts of debt if instruction came at no cost. With this, they’d take on smaller repayments for things such as books or housing perhaps. Moreover, opportunities for high school students to move forward with attending college could increase, without tuition hindering them. Consequently, the United States would possess a population of people with greater education and intellectual abilities.
Despite the benefits that could come from not charging students tuition, drawbacks have their place as well. For instance, if this kind of policy ever took shape in this country, citizens, unfortunately, would have to pay higher taxes to fund it. “Colleges and universities must pay their employees, maintain their facilities, and provide services for students,” said assistant principal Patricia Myszkowski. “Someone has to pay for that. If it is not tuition that covers the cost, then the cost will inevitably be placed on the taxpayer.” Additionally, by offering tuition-free higher education, students getting out of public colleges or universities might gain less experience when it comes to budgeting. According to Collegeraptor.com, “College loans are often the first major financing dealing that people work with. Paying them off in a timely manner proves you know how to budget your money, skills people use again and again when buying cars or houses. Without having to pay for school, that experience won’t exist.” Last but not least, the practice of canceling tuition for public higher education might downplay its importance and value. “Students may not invest and apply themselves in their classes because they aren’t paying for anything,” said Simi Valley High School’s College and Career Center teacher Jennifer Gast. Not to mention, the shorter quantity of time it takes to graduate, the smaller amount of debt will remain. But, in opposition to this, no pressure to finish college allows room for students to slack off and fall into a state of idleness.
When taking into consideration the benefits and drawbacks of tuition-free public higher education, the resolution won’t come as easy as pie. Although it could open doors for more opportunities to students and reduce loan debt, taxpayers would have the burden of funding it. But, even if this kind of system doesn’t come into play, keep in mind that other alternatives do exist for those that seek them. “There are people that college doesn’t work for them, so trade schools are very important too,” said principal’s secretary Harriet Hunsaker. “They are more cost-effective as well.”